AccuCal-D™ calibrator was developed to overcome the shortcomings of using relative gene expression methods for qPCR. In contrast to relative quantification, the AccuCal-D™ method uses FL data from a qPCR run to calculate the starting copy number of a gene of interest (GOI) in a sample to give called absolute quantification.

AccuCal-D™ method can be used on any instrument using master mix with HRM or SYBR® Green dyes. A universal standard curve is generated using prediluted AccuCal-D™ reagents, compared with the standard curve method, where GOI templates of known concentration have to be included in each run.

Using standard curves are a common method of determining amplification efficiency. However, the main limitation of this method is the assumption that all samples are amplified with same efficiency. Sample type and concentration, RNA isolation method and type of reverse transcriptase can inhibit the qPCR reaction. RealCount™ utilizes a method for individual amplification reaction efficiency determination from the log linear phase of the sigmoidal amplification curve. This kinetic-based approach, called “linear regression of efficiency” allows you to omit primer optimization using standard curve.

RealCount™ is a program that closely analyzes the shape of PCR amplification curve and as a result delivers absolute gene copy number in your sample at cycle zero. The software performs baseline correction, determines assay efficiency from each amplification curve using window of linearity or Rojter method2, and then using the AccuCal-D™ standard curve calculates starting concentration in copy number per sample. This method works on any qPCR instrument using your choice of HRM or SYBR® Green dye containing master mix . 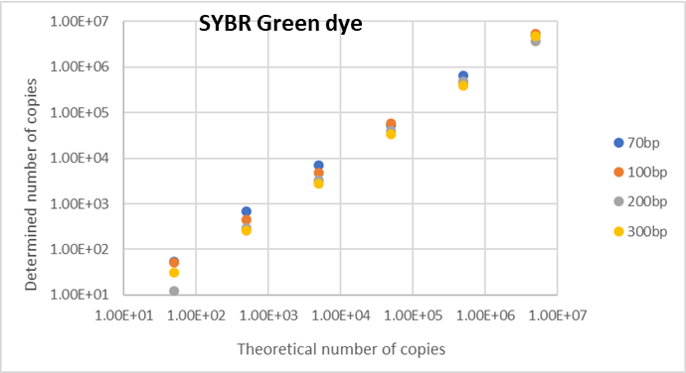 AccuCal-D™ does not require any special equipment, besides the reagents provided in the kit and installation of the free RealCount™ software. Reagent kits come in several sizes to suit researchers needs and enables researches to reduce number of wells used for their experiments. This combination enables researchers to achieve absolute quantification of a fraction of the price of digital PCR and/or the standard curve method.